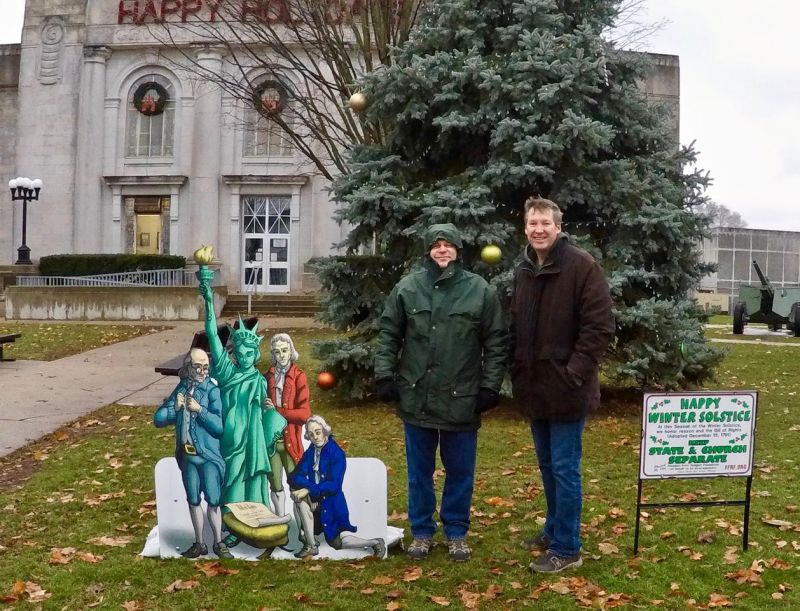 A group campaigning for the removal of Christianity from American schools and the public square has placed an atheist nativity scene outside an Illinois courthouse.
Instead of the traditional figurines of Mary and Jesus watching over baby Jesus, the Freedom From Religion Foundation nativity shows cutouts of American’s founding fathers Benjamin Franklin, Thomas Jefferson and George Washington gazing down upon the Bill of Rights lying in a straw-filled manger.
The display was installed on the front lawn of the Grundy County Courthouse, near Chicago, and will stay until the end of December.
Beside the scene is a sign wishing visitors to the courthouse a happy winter solstice.
‘Happy Winter Solstice. At this Season of the Winter Solstice, we honor reason and the Bill of Rights (adopted Dec. 15, 1791),’ the sign reads.
At the bottom, it adds: ‘Keep State & Church Separate.’
The FFRF said: ‘With the help of its ever-vigilant membership, the Freedom From Religion Foundation is keeping the flag of free thought flying high around the country.’
A Christian Nativity scene traditionally appeared outside Grundy County Courthouse until 2015 when it opened the space up to other religions. Pressure from the FFRF was part of the reason for the change in policy.
‘In Illinois the county’s sheriff has custody of the courthouse. In 2013 we received a letter from the Freedom From Religion group in Wisconsin stating we had a manger alone on the lawn,’ Assistant State’s Attorney Perry Rudman said at the time, adding that there was the possibility of a lawsuit against the county.
‘They questioned the laws and cited various court cases supporting the removal,’ he added.
Christian displays at US state and county buildings have come under increasing threat in recent years.
In May, the American Civil Liberties Union filed a lawsuit against the state of Arkansas after it erected a monument of the Ten Commandments outside the state capitol.
The Satanic Temple protested the Ten Commandments monument by asking the Arkansas legislature to allow a statue of Baphomet to be placed outside the capitol as well.
Courtesy of Christian Today