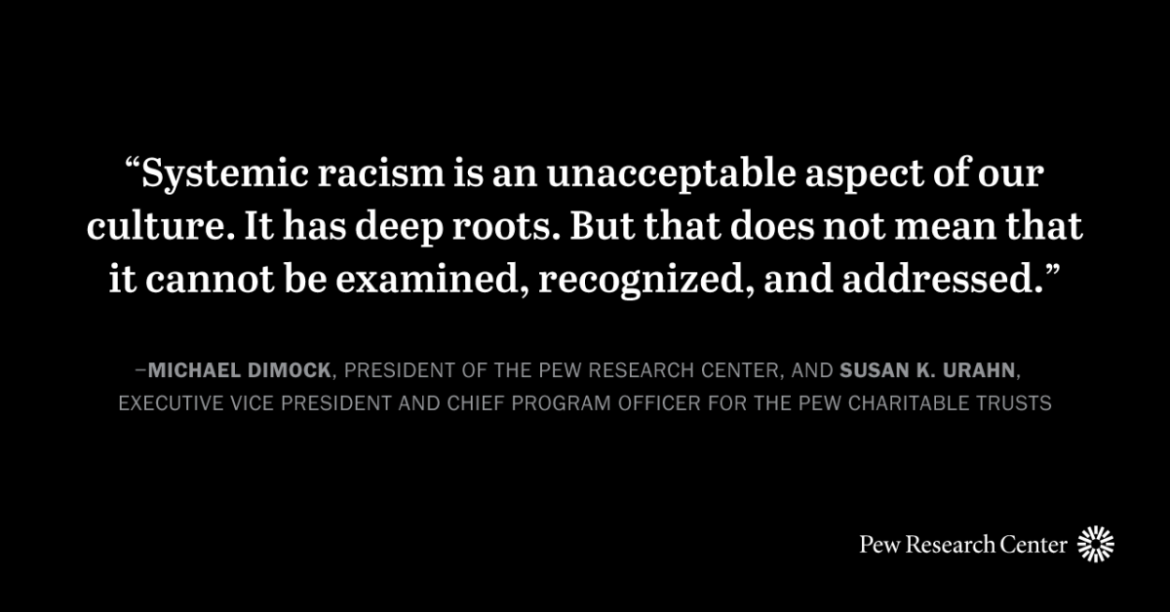 As Americans, we are appalled and heartbroken by the death of George Floyd. His name—along with Ahmaud Arbery’s and Breonna Taylor’s—is among the most recent we have come to know. We mourn them all. And in doing so, we are reminded that many of our fellow citizens have lost their lives to bigotry and racism, and that there are others whose stories we have yet to hear.
Systemic racism is an unacceptable aspect of our culture. It has deep roots. But that does not mean that it cannot be examined, recognized, and addressed.
For decades, we have sought to understand and explain the unique experience of people of color in the United States. In 1995, The Pew Charitable Trusts began funding public opinion surveys designed to examine the trends shaping our nation. Since its establishment in 2004, the Pew Research Center has focused on race and ethnicity as a key variable in explaining the full spectrum of the American experience: economics, family, work, politics, technology, identity, and faith. It has included deep dives into the views and experience of African Americans, Asian Americans, Hispanics, and those of mixed racial and ethnic heritage.
We know that the experience of black Americans is different than that of white Americans in many ways. The Center’s exploration of issues of discrimination, policing, and online harassment make that clear. In 2019, for example, its “Race in America” report showed that among those who say being black hurts people’s ability to succeed, 84% of black Americans— compared with 54% of white Americans—say racial discrimination is a major reason why blacks may have a harder time getting ahead. And African Americans are roughly five times as likely as whites to report having been unfairly stopped by police.
While the Pew Research Center has rigorously documented these and other disparities and experiences, The Pew Charitable Trusts has sought ways to directly address some of the challenges that disproportionately affect people of color, including incarceration, juvenile justice, debt, and access to credit. We will continue to listen, learn, document disparities, and work toward much-needed change.
The protests across the country—many peaceful, some sadly violent—reflect the anxiety, rage, and helplessness that many people feel so acutely at this moment. We hope to contribute to national conversations that are long overdue and seek data-driven solutions to some of the obvious problems our country faces.
First and foremost, as nonprofit leaders devoted to making a difference, we want to hear more from our employees. Building an inclusive, respectful culture is hard work. It begins in our own workplaces and in our own families. It requires solid information and data, but it also requires difficult personal conversations that allow individuals to share their thoughts, experiences, anger, and sadness.
We also intend to deepen our examination of America, what divides us as well as what binds us. There are uncomfortable truths and diverse voices that need to be understood if we are to move forward as a nation. The unique experiences of people of color must be conveyed, in all their pain and strength, in order to be heard and then addressed. We are committed to that goal and stand with our many partners doing the difficult work of confronting racism and working for a better America.
Michael Dimock is president of the Pew Research Center, and Susan K. Urahn is executive vice president and chief program officer for The Pew Charitable Trusts.