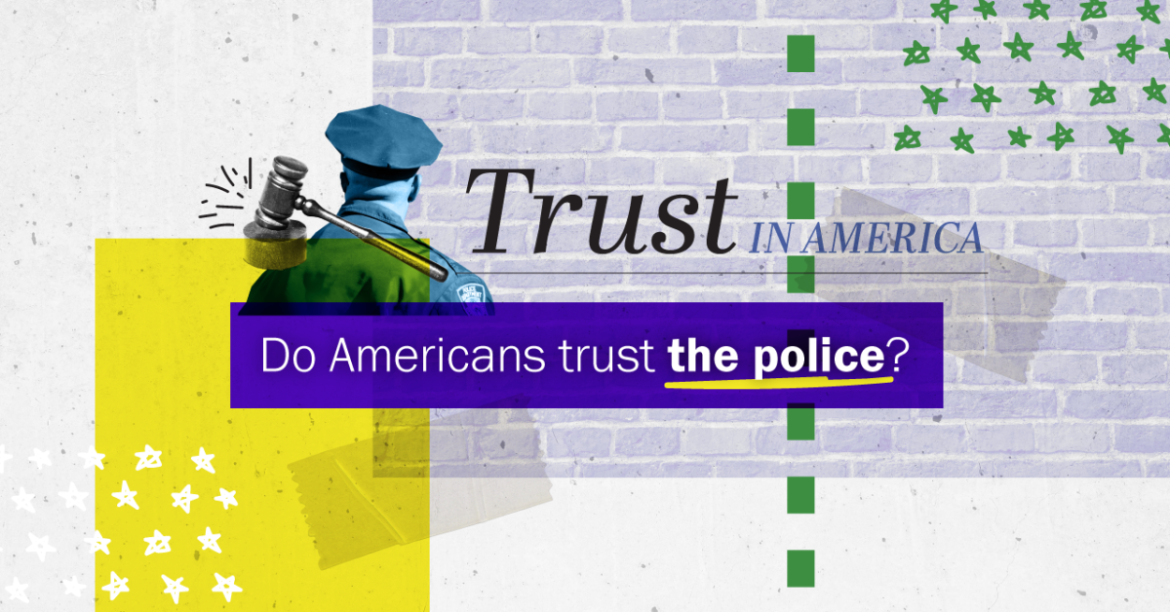 The relationship between the public and police across the United States was brought into sharp focus over the course of 2020 and 2021 following the high-profile killings of several Black Americans by police, including George Floyd and Breonna Taylor, and the worldwide protests that followed. In this episode of our Trust in America video series, our researchers discuss Americans’ trust in police, how views of and experiences with policing vary across political and demographic lines, and how Americans feel about proposals for police reform.

[Intro] Trust in America, in institutions, in each other is essential to the functioning of U.S. democracy. Yet today, trust is declining. So what impact does this have on American society? In this episode, Jocelyn Kiley and Kim Parker help explain trust in police and views of police reforms.

[Jocelyn Kiley] The relationship between the public and police across the country, while not a new issue, was brought into sharp focus over the course of 2020 and 2021. Throughout the summer and fall of 2020, protests around the U.S. put the issue front and center, following the killings of several Black Americans by police, in particular, the murder of George Floyd by police officer Derek Chauvin, who was convicted in the spring of 2021. When we look at public opinion on police and policing in our surveys, we find that views of and experiences with policing vary substantially across political and demographic lines.

[Kim Parker] Yes, in November of 2020, we asked American adults how much confidence they have in police to act in the best interests of the public. And what we found was that most said they have at least some confidence, with 26% saying they have a great deal of confidence. There are a few major fault lines that I would point to in looking at these views, and race and ethnicity is one of them. White adults are much more likely than Black or Hispanic adults to say that they have a great deal of confidence in the police. There are also significant differences by age. Young adults are much less trusting of police than middle-aged and older adults. And the views are also deeply divided by party identification. About four-in-ten Republicans and Republican leaners have a great deal of confidence in the police, and that compares with only 13% of Democrats and independents who lean to the Democratic party.

[Jocelyn Kiley] So we know these differences in attitudes can result from a lot of different dynamics, but one is certainly personal experience.

[Kim Parker] We asked people about some of the different ways they may have been discriminated against because of their race or ethnicity across different realms of life. And one of the things that we asked about was whether they had ever been unfairly stopped by the police. What we found was that almost half of Black adults said that this had happened to them, including about two-thirds of Black men. And by comparison, 19% of Hispanic adults and only 9% of white adults said that this has happened to them. And I think these gaps in experience give us some real insight into why Black adults feel the way they do about the police and also why they might want to see changes in the way that police do their jobs.

[Jocelyn Kiley] So in our summer 2020 survey, we found a broad base of support for a number of proposals about policing. The public overwhelmingly backs requiring training in nonviolent alternatives to deadly force, a federal government database to track misconduct allegations. Those are supported by nine in 10 Americans. Also, wide majorities of Americans support giving civilian oversight boards investigative and disciplinary powers and requiring officers to live in the places they police and making chokeholds or strangleholds a crime. These are all proposals that have come up. And while there are demographic differences, such that Black Americans and Democrats are more likely to support these things and the intensity of support is higher, there is a fair amount of support among white Americans and Republicans for all of these things as well. Even as there are differences in how Americans view police, there are also some areas where, at least in the public at large, there’s common ground. One question is, as proposals for change continue to come up at various levels of government, federal, state, local, how will that manifest in public attitudes?