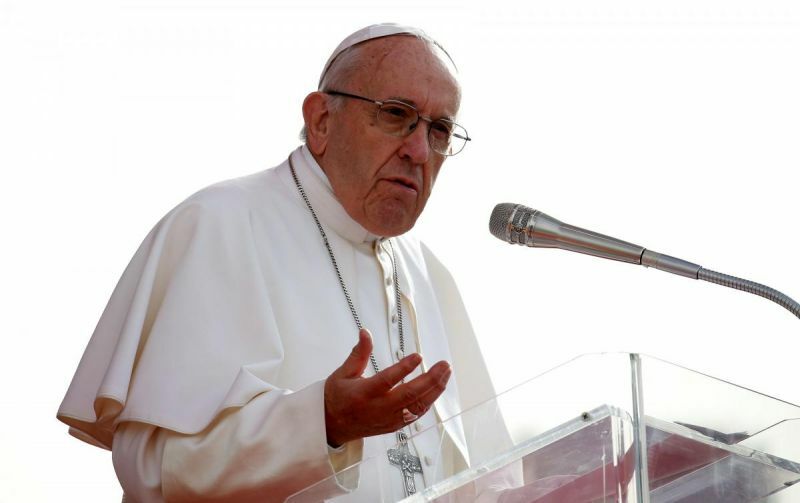 Pope Francis speaks to the faithful during his pastoral visit in Pietrelcina, Italy March 17, 2018. | REUTERS/Ciro De LucaPope Francis has called on parents of children who identify as LGBT to “accompany” them and “not hide in an attitude of condemnation.”Speaking before a general audience Wednesday, the pontiff discussed the four dreams of St. Joseph. He remarked that “God does not promise us that we will never have fear, but that, with His help, it will not be the criterion for our decisions.” Francis emphasized that “Joseph experiences fear, but God guides him through it,” adding: “The power of prayer brings light to dark situations.”“At this moment, I am thinking of so many people who are crushed by the weight of life and can no longer hope and pray,” he said. “I am thinking, too, of parents who are facing their children’s problems: children with many illnesses, children who are sick, even with permanent illnesses — how much pain is there — parents who see different sexual orientations in their children; how to deal with this and accompany their children and not hide in an attitude of condemnation.”While the pope touched upon “so many parental problems” in his remarks, his comments advising parents to “accompany” their children who identify as LGBT received particular attention. Critics saw the comments as the latest example of mixed messaging coming from the Vatican regarding the contentious topic of human sexuality.In a 2020 documentary, the pontiff asserted that “homosexual people have a right to be in a family.” In addition to suggesting that “they are children of God and have a right to a family,” he appeared to express support for the creation of a “civil union law.”Upon receiving criticism, a Vatican official insisted that the pontiff’s comments were “edited” and missing “necessary contextualization.” According to the Vatican Secretariat of State, “Pope Francis was referring to particular state religions, certainly not the doctrine of the church, which he has reaffirmed numerous times over the years.”Last year, several months after the controversy surrounding the pope’s comments about civil unions, the Vatican’s Congregation for the Doctrine of the Faith released a statement proclaiming that “It is not licit to impart a blessing on relationships, or partnerships, even stable, that involve sexual activity outside of marriage.” The statement indicated that the Catholic Church cannot bless “unions between persons of the same sex” because they “exist within the context of a union not ordered to the Creator’s plan.”The Catechism of the Catholic Church, which contains all the church’s teachings, teaches that “homosexual acts are intrinsically disordered” and “under no circumstances can they be approved.” The Catechism calls on those who have same-sex attraction to practice chastity just like “all the baptized.”Additionally, the Catechism maintains that individuals who are attracted to members of the same sex “must be accepted with respect, compassion and sensitivity” and that “every sign of unjust discrimination in their regard should be avoided.” This wording in the Catechism is very similar to the pope’s encouragement to avoid an “attitude of condemnation” when it comes to individuals who identify as LGBT.However, another action taken by the pope last month also raised eyebrows. He wrote a letter to a Catholic nun who had previously been banned by the Vatican’s Congregation of the Doctrine of the Faith from doing any pastoral work related to LGBT people because her ministry and efforts to reach out to the community did not accurately portray “the intrinsic evil of homosexual acts and the objective disorder of the homosexual inclination.” However, the pontiff thanked the nun for her “closeness, compassion and tenderness.”In addition to his messaging on LGBT issues, Francis’ stance on the Traditional Latin Mass has also angered many Catholics. Last year, the pontiff published an apostolic letter imposing restrictions on the celebration of the Traditional Latin Mass, which many Catholic Churches across the world continue to celebrate more than a half-century after most churches began to conduct masses in the local vernacular.Francis cited a desire for church unity when calling on bishops who lead dioceses where Traditional Latin Masses are held to set aside locations “where the faithful adherents of these groups may gather for the eucharistic celebration (not however in the parochial churches and without the erection of new personal parishes).” In addition to implying that church facilities could no longer hold Latin masses, the guidance instructed bishops not to allow the establishment of new groups that celebrate the Traditional Latin Mass.The apostolic letter received swift backlash and more than 36,000 Catholics have signed a petition designed to “Show Pope Francis the Latin Mass will survive any suppression” in the six months since it was published. According to the Latin Mass Directory, there are currently 651 Catholic churches in the United States that celebrate at least one Traditional Latin Mass at some point during the week.Originally published in The Christian Post.