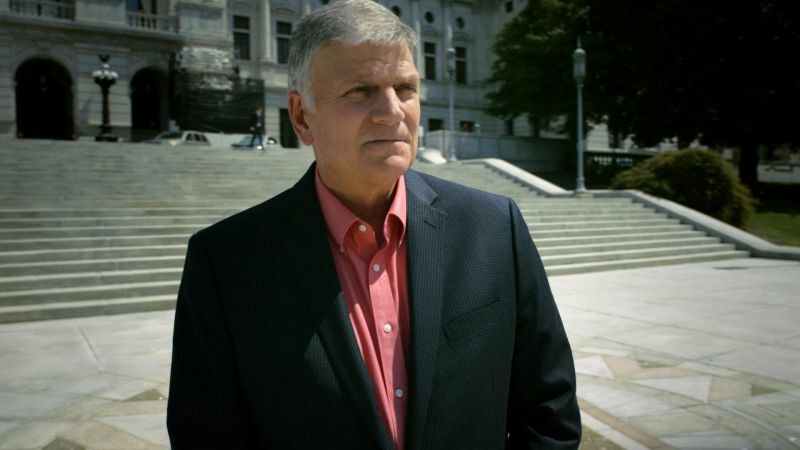 Franklin Graham appears in a screen capture of a video from the Billy Graham Evangelistic Association | YouTube/Billy Graham Evangelistic AssociationAs more than 1,300 civilians have been killed in Russia’s unprovoked invasion of Ukraine, evangelist Franklin Graham is urging Russian President Vladimir Putin and Ukrainian President Volodymyr Zelenskyy to agree on a ceasefire during the 10 days of Easter observances.“I have written to … Putin and to … Zelenskyy asking for a ceasefire from April 15-24,” Graham, who heads the international humanitarian organization Samaritan’s Purse and the Billy Graham Evangelistic Association, wrote on Facebook on Thursday.“I shared with them that I will be calling on churches in Ukraine, Russia, and around the globe to join together in prayer during those 10 days,” wrote Graham, who recently visited Ukraine. “May we humbly unite before the King of kings and the Lord of lords, the Prince of Peace, to ask for His help and mercy.”Graham wrote that he hopes that if they can agree to a 10-day ceasefire, then “maybe they can stop fighting for two weeks.”“If they stop for two weeks, maybe they can stop for a month,” he added. “If they stop for a month, maybe they can stop for good. You’ve got to start somewhere.”Since Russia began its invasion on Feb. 24, at least 1,325 civilians have been killed and 2,017 injured as of a Saturday update from the United Nations. Among those killed are 120 children. Since the invasion began, more than 10 million people in Ukraine have been forced to flee their homes. Graham, the son of legendary evangelist Billy Graham, said the deadly conflict is “a man-made disaster, a historic humanitarian crisis. He believes “God is the only solution.”In an interview with The Christian Post last month, Graham discussed Samaritan’s Purse’s efforts to minister to help Ukrainians fleeing the regions of their country targeted by Russia for western Ukraine.The organization has established a field hospital in western Ukraine. The North Carolina-based charity is operating medical clinics and distributing relief items through 3,000 church partners in Ukraine and Moldova. The charity has made five airlifts, delivering more than 185 tons of supplies since March 4. “You’ve got people that are diabetic, you’ve got people with heart conditions, high blood pressure, all of these kinds of things are just normal everyday problems of life,” Graham said. “On top of that, you have a lot of people that … have been wounded … due to the shelling. And so, you have to throw that into the mix.”Among the medical clinics Samaritan’s Purse has established is a 24-hour clinic at a train station in Lviv and another at a bus station in the city. A third clinic is located in Chernivtsi in southwest Ukraine.Samaritan’s Purse has over 150 staff members in the region and treats over 100 patients per day. The organization has seen more than 2,400 patients across all of its medical sites as of last week. The organization plans to set up a second emergency field hospital near the front lines of the conflict. Graham has received scrutiny in the media for his past meetings with Russian religious and government leaders.UnmuteAdvanced SettingsFullscreenPauseUp Next“When I go to Russia, we’re not there for political reasons,” Graham said. “We’re there for spiritual reasons. … We want to have an impact with the churches. Russia’s the largest landmass in the world, and … they go from one time zone to the other. … This is a huge country and we ought to try to help the churches as best we can.”Graham, who met Putin in 2015, attributed his past meetings with Putin and Russian leaders to a desire to “try to be a positive force in Russia” to “benefit the work of evangelicals” and “try to improve the relations with churches.”“If we don’t go and if we don’t talk to them, then nothing happens,” Graham stated. Although Graham has met with Russian leaders in the past, he took action in opposition to Russian policies that impact religious freedom. In 2016, he moved the World Summit in Defense of Persecuted Christians that was initially scheduled to take place in Moscow out of Russia in opposition to a law that severely limits the freedom to evangelize in public. Specifically, the law banned evangelism outside of churches, which restricted missionary activities in residential neighborhoods. The law also required Christians to obtain government permission before they can share their faith with others publicly.  Graham rescheduled the summit for Washington, D.C., in May 2017.In Russia, police have arrested thousands of protesters who have demonstrated against the invasion amid widespread censorship of social media and news outlets.More than 280 priests and deacons of the Russian Orthodox Church and over 400 ministers of Evangelical churches in Russia have called for reconciliation and an immediate end to Russia’s ongoing invasion of Ukraine.In his Facebook post, Graham urged Christians worldwide to “pray for God to work in the hearts of leaders involved and to intervene and bring peace and an end to the conflict.”“I pray there will be an end to this horrible conflict even sooner — Today!” he wrote. “But if not, maybe this could be a starting point. Will you join me in this prayer?”Originally posted on The Christian Post.