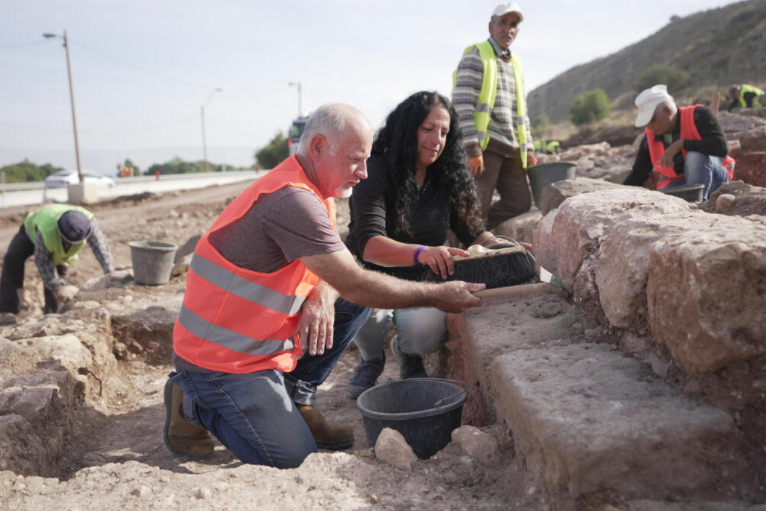 Dina Avshalom-Gorni, right, works at the excavation site of an ancient synagogue in Migdal. | University of HaifaArchaeologists say a second synagogue dating back to the Second Temple period has been discovered in what is believed to have been the birthplace of Mary Magdalene of the Bible and is “changing our understanding of Jewish life in this period.”While excavating the Galilean town of Magdala, known today as Migdal, archaeologists say they found the remnants of a second synagogue dating back to the Second Temple period — which in history was a time that is believed to have lasted between 515 or 516 B.C. up until 70 A.D. “This is the second synagogue from the Roman period that has been uncovered in the village — and the first case of the existence of two synagogues in any locality from the Second Temple period, a period when the Temple in Jerusalem was still standing,” the Israel Antiquities Authority shared on Facebook.Prof. Adi Erlich,  who heads the Zinman Institute of Archaeology at the University of Haifa, and Dina Avshalom-Gorni, who directs the excavation of the site on behalf of the University of Haifa, believe the discovery “sheds light on the social and religious life of the Jews in the Galilee during this period.” They contend that the finding “indicates the need for a special building for studying and reading the Torah and social gatherings.” The first synagogue in Migdal was uncovered in 2009 through an excavation that found ritual baths, streets, a marketplace and industrial facilities in the ancient village.The second synagogue was first discovered by probes conducted by Barak Tzin of the Israel Antiquities Authority and lies less than 200 meters away from the first synagogue. The IAA statement states that the discovery of the second synagogue is “changing our understanding of Jewish life in this period,” IAA stated. “We can imagine Mary Magdalene and her family coming to the synagogue here, along with other residents of Migdal, to participate in religious and communal events,” excavation co-director Avshalom-Gorni told the Israeli newspaper Haaretz. The discovery was made amid a plan to build new infrastructure in the town of Migdal. But while the areas were being excavated — a typical practice in advance of construction —  the second synagogue was discovered by the IAA, Y.G. Contractual and the University of Haifa.  Avshalom-Gorni told the newspaper that the first synagogue had a decorative mosaic floor and the second one had a compacted, plastered and earthen floor. The second synagogue is said to be smaller and not as ornate as the first. The first synagogue was in an industrial area, while the second was located in a residential street, which suggests they were built “within the social fabric of the settlement,” Avshalom-Gorni told The Times of Israel.The Times of Israel reports that the second synagogue consisted of the main hall and two side rooms. A stone bench was also recovered. Archeologists found bases for two of the building’s six pillars that held up the roof. The walls of the synagogue were colorfully decorated and covered in plaster. Archeologists believe that a room at the south end of the main hall with a shelf may have stored scrolls.Originally published in The Christian Post.