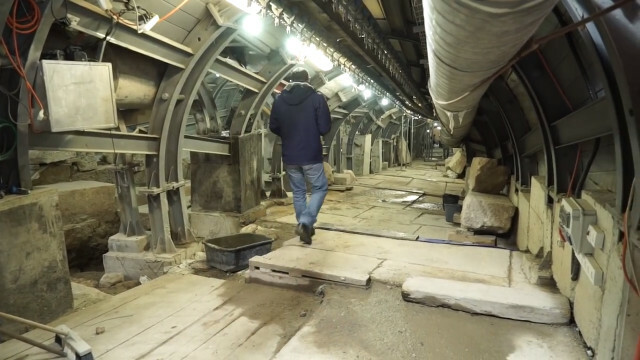 An ancient street unearthed by Israeli archaeologists appears in a screen capture of a video from Israel Antiquities Authority. | YouTube/Israel Antiquities Authority Official ChannelArchaeologists in Israel say they have discovered in eastern Jerusalem a 2,000-year-old precious gem an engraving that depicts the Balm of Gilead, a rare perfume used medicinally and which was mentioned in the Hebrew Bible.The Israel Antiquities Authority announced the discovery of an ancient amethyst seal bearing the first known depiction of the plant just north of the City of David, Jewish News Syndicate reported.The seal was found during excavations in the Emek Tzurim National Park along the foundation stones of the Western Wall in Jerusalem’s Old City, it added.“This is an important find, because it may be the first time that a seal has been discovered in the entire world with an engraving of the precious and famous plant, which until now we could only read about in historical descriptions,” archaeologist Eli Shukron, who conducted the excavation, was quoted as saying.“Toward the end of the Second Temple period, the use of stone stamps expanded and became more common,” The Jerusalem Post quoted Prof. Shua Amorai-Stark, an expert in engraved gems, as saying.“But in most stamps discovered so far with plant engravings, it is common to find plants that were common in Israel at the time: vines, dates and olives, which are among the seven species. But on this stone seal, we immediately noticed that the fruit that appears on it is unlike any of the fruits we have encountered to date.”The Bible prominently mentions the Balm of Gilead, also known as balsam tree or “persimmon.”After having cast him into a pit, Joseph’s brothers saw a caravan on its way from Gilead to Egypt, “with their camels bearing spicery, and balm, and myrrh,” according to Genesis 37:25.While dispatching his embassy into Egypt, Jacob gifted “a little balm” to the unknown ruler, as per Genesis 43:11. During the final years of the Kingdom of Judah, Jeremiah asks in Jeremiah 8:22, “Is there no balm in Gilead?”The oval stone uncovered by archeologists is about 10 mm long and five mm wide, and it also features a bird that looks like a dove, the archaeologists said.“The balsam plant is a positive symbol because, beyond the fact that it was used to produce perfumes and medicines, the ancient persimmon — which, by the way, is not at all similar to today’s persimmon — was attributed magical and ceremonial properties and is one of the ingredients used for making the Temple incense during the Second Temple period, which is when this seal was made,” Shukron was quoted as saying.“The dove is also a positive motif in the Hellenistic, Roman and Jewish world,” Amorai-Stark said. “It symbolizes wealth, happiness, goodness and success.”Originally published on The Christian Post.