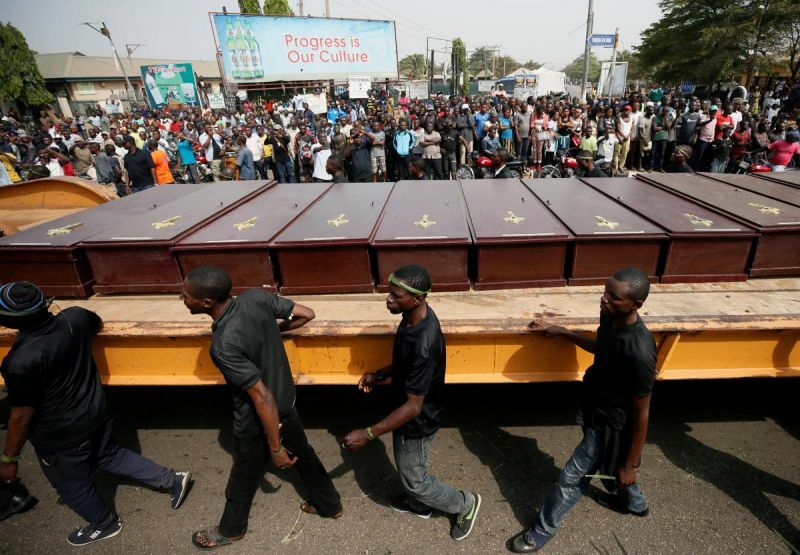 Men march along the truck carrying the coffins of people killed by the Fulani herdsmen, in Makurdi, Nigeria January 11, 2018. | REUTERS/Afolabi SotundeSuspected Fulani herdsmen shot to death four people, including a pastor and two women in two separate attacks in Benue State on Tuesday, according to Nigerian media reports.Pastor John Ajav of the Pentecostal network Deeper Life Church was killed in Waku village while he was on his way to a church program Tuesday morning, Vanguard reported. Additionally, three farmers were said to have been killed on the same day while they were working on their farms in the Nyiev Council Ward area.All the killings reportedly occurred in the Guma local government area.Confirming the attacks, Tivlumun Nyitse, the chief of staff to Benue Gov. Samuel Ortom, who is from the area where the incidents occurred, wrote on his Facebook page that it was “a very sad day.”“We lost Pastor John Torbee Ajav this morning to some Fulani marauders who shot him on his way to Gbajimba to attend a religious function,” he wrote, according to Vanguard and the daily newspaper The Punch. “The late John was a pastor with the Deeper Life Bible Church, Umenger. May the Lord receive his soul with mercy.”The Christian Post reached out to Deeper Life Christian Ministry for comment on Ajav’s reported killing. A response is pending. The killings come as there has been an increase in attacks by suspected Fulani radicals against farming communities in Nigeria’s Middle Belt states in recent years that have reportedly led to thousands of deaths. The herdsmen involved in Tuesday’s attack in Benue reportedly came from neighboring Nasarawa state.“These terrorists have continued to attack and kill our people for no reason whatsoever,” Caleb Abah, the Chairman of Guma local government area, was quoted as saying.On March 17, heavily armed Fulani herdsmen attacked Agunu Dutse village in Kachia County in Kaduna state shortly after midnight, abducting at least 46 Christians and their children, Morning Star News reported. In a separate attack two days later, more than 100 herdsmen and Islamist terrorists killed 32 civilians in Kagoro town in Kaura County.Weapons are being made available to militants in Nigeria by way of war-torn Libya. And in the country’s northeast region, the terrorist groups Boko Haram and Islamic State West Africa Province have killed thousands and displaced millions in recent years.The U.S.-based persecution watchdog group International Christian Concern warns that the Nigerian government “continues to deny any religious motivation behind the attacks.”The Nigerian government, led by President Muhammadu Buhari, who comes from a Fulani background, attributes the violence in the Middle Belt states to decades-old farmer-herder clashes. However, Christian human rights advocates have accused the government of overlooking religious elements and not doing enough to protect Nigerian citizens. Last year, the U.S. State Department removed Nigeria from its list of “countries of particular concern” for tolerating or engaging in egregious violations of religious liberty after it was placed on the list in 2020 by the Trump administration. The removal of Nigeria from the list drew backlash from some human rights activists. Many have raised concerns about what they perceive as the government’s inaction in holding terrorists accountable for the rising number of murders and kidnappings, which some groups warn have reached the level of genocide. ICC identified Nigeria as one of its 2021 “Persecutors of the Year.”“Nigeria is one of the deadliest places on Earth for Christians, as 50,000 to 70,000 have been killed since 2000,” the ICC Persecutor of the Year report states.Open Doors USA, which monitors persecution in over 60 countries, reported that at least 4,650 Christians were killed between Oct. 1, 2020, and Sept. 30, 2021. That is an increase from 3,530 the previous year. Additionally, more than 2,500 Christians were kidnapped, up from 990 a year earlier.Originally posted on The Christian Post.